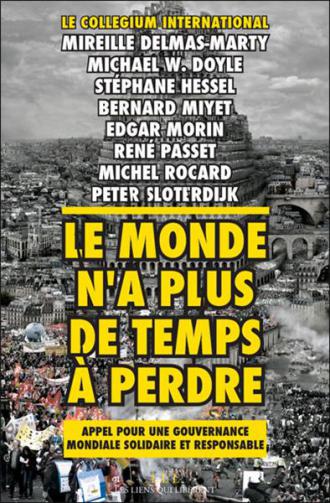 These developments, which have taken place in the context of an uncontrollable expansion and revolution in communications technology, are largely the results of a major crisis of thought and of sense, and of the deterioration of a matrix of fundamental values.

The planetary conscience is not up to these challenges, even though humankind, its own worst enemy, needs to protect itself from auto-destruction by warding off the unrelenting forces. The international community must urgently identify the measures and fashion the tools necessary to combat the risks threatening the existence of millions of human beings across the planet.

It would be vain to merely bemoan the negative effects of globalisation, of capitalism, and of fanatism, and unrealistic to wish to draw up a roadmap or a perfect model of society. It is now imperative that we implement the needed reforms and transformations, designing them in a holistic and interdependent manner. This global approach is of the utmost importance as the problems that we face are interconnected and constitute the vectors of a “poly-crisis”, threatening our world with a “poly-catastrophe”.

Economic globalisation has created the infra-textures of a world society, such as a planetary communications network and economy. At the same time, however, nothing has been done to put in place the legitimate decision-making structures that this evolution presupposes, or to encourage the emergence of an awareness of our undeniable shared destiny.

The international community has, regrettably, proven its impotence, if not its irresponsibility, in the face of these dangers. It is clear that the sovereignty of the people, the foundation of most political regimes, does not encourage leaders to devote sufficient attention to crises that occur in the antipodes, or to concern themselves with long-term challenges, given the frequency of and circumstances surrounding electoral cycles.

These contradictions are not temporary, as they are integral to our world’s democratic modus operandi. In truth, existing multilateral bodies do not possess the direct democratic legitimacy needed to formulate binding norms. At the same time, nobody can imagine the construction of a society based on the principle of a planetary nation-state.

In order to overcome this difficulty without betraying our values, the sole available solution is to rethink the very principles of global governance. This process must take place under the auspices of the only body with the legitimacy to deal with global challenges: the United Nations. Such an exercise can only be undertaken by persons who have exercised high political, academic, or economic offices, have a clear view of world affairs and who, free from electoral constraints, are able to think beyond the interests of their own generation, country or social group.

The purpose of this reform must be to reconcile the conflicting interests of current and future generations, to germinate a common planetary interest in the great challenges of this century, and to re-establish a form of solidarity that today is compromised by widespread increases in social inequality.

It is essential that the pioneering spirit of the Charter of the United Nations, which proclaimed “We the peoples…”, be restored and rendered truly universal, taking account of the interests of all nations, of all social groups and of every generation, particularly those that are still to come. The paramount need to save humanity from disaster engenders the categorical imperative of transformation.

There is an urgent need to set in motion a drafting process to establish a Pact of the Peoples, to be submitted for adoption by the States attending the Paris-Climat 2015 Summit. This document should provide an occasion for the international community to operate an essential and decisive shift.

The Appeal launched by the Collegium International is addressed to the Secretary General of the United Nations, with a view to its submission for consideration at the next G20 Summit, and to the President of the French Republic, host of the Paris-Climat 2015 planetary conference.

(Draft translation of the French original)