When I nonchalantly volunteered to join the organising committee of the 42nd Annual Gala of The American Women’s Group in Paris (AWG), at their monthly morning coffee member’s meeting, little did I know that I would be swept into the heart of  the largest active English-speaking women’s group in France.. celebrating its 67th year of existence.

The Gala is their biggest fundraising event of the year, given that not only is AWG’s mission to promote the cultural patrimony of France through the rich cultural programming it offers as a French registered non-profit cultural and educational organization, it is also – and most importantly – to raise money for the charities it supports tirelessly, as part of FAWCO: The Federation of American Women’s Clubs Overseas, a global women’s NGO and international federation of independent volunteer clubs and associations founded in 1931, with special consultative status to the UN Economic and Social Council, whose mission is to improve the lives of women and girls worldwide (especially in the areas of human rights, health, education and the environment); advocate for the rights of U.S. citizens overseas;  and contribute to the global community through its Task Forces and the FAWCO Foundation, which provides development grants and education awards.

Having met and chatted with the very active and proficient incumbent AWG President, Kathryn Brown and its highly efficient Treasurer, Kathy Araujo, expressing to them my interest in joining the gala committee, I was rapidly put in contact with its chairman, who invited me to attend the next weekly meeting of the AWG Gala Organising Committee.  Although having a full schedule, I couldn’t resist the call to action, given the worthwhile objectives of the gala.

This year, the American Women’s Group in Paris’ Annual Gala proceeds will be donated to the following four charities: Tostan, an international non-profit organization working in six West African countries, this year supporting its Generation Change Project; Global Potential: sponsoring its 18 month educational program which trains disadvantaged French youth to become leaders in their own communities; the FAWCO Foundation: the AWG’s umbrella organization where donations will be used in Burkina Faso to train girls as midwives, nurses, and teachers; and finally AWG Gives Back, supporting small scale projects locally and internationally, as well educational and cultural activities among AWG members.

I found myself, on a rainy Friday morning, taking the metro to the Gala Chair’s offices at The American Graduate School’s campus in the heart of Saint-Germain-des-Prés.. my favourite “quartier” in Paris, not knowing what to expect.  Taking the elevator to the designated meeting room, I was welcomed by members of the committee: an interesting mix of American, French, and international women: expat wives and mothers, long-term Parisian residents (I, being one of them), and young graduate students – at first feeling slightly out of it – as I had joined proceedings quite late in the game.

To my surprise, I was immediately put at ease by the warmth and energy of the 2016 AWG Gala Chair, Mrs. Terry Verdoscia. Over the coming months, I was to witness first-hand the contagious enthusiasm, dynamism, and tireless dedication of Mrs. Verdoscia to her cause: to create an outstanding Gala event, raising as much funds as possible for AWG’s charities .. I could not help but become a fan.

“Bref”.. after months of Friday morning meetings, hundreds of hours of tireless effort by its chair and gala committee members to secure the many large and smaller donations from generous donors to be auctioned, and a flurry of last-minute preparations, the time had finally come: the 2016 AWG Annual Gala, with its theme as “April in Paris“, was taking place at the very grand Art Nouveau “Hôtel particulier”, Les Salons des Arts et Métiers in the 16th arrondissement of Paris.

The venue, discovered by local committee member Corinne Levet, who was also in charge of securing the generous donations of premium French wine cases and magnums by some of the best Chateau’s and Domaine’s in the land to be put under the hammer at the Live Auction, was nothing short of spectacular.  Two elegant salons, boasting large windows with an amazing view of the Tour Eiffel and high ceilings typical of late-19th century Parisian architecture, had long tables in the centre displaying the items to be put up for the Silent Auction, with bid sheets just beneath them, ready for the excitement of discreet bidding by the gala guests.

Amongst the amazing donations on offer was a weekend stay at the Comte et Comtesse Arnaud de Pontac’s historic Château de Servigny in Normandy, a romantic getaway in Aix-en-Provence, a luxurious two-night stay at the Four Seasons Hotel in London’s Park Lane, a one-week stay at an Italian villa, a champagne “degustation pour deux” at Le Bristol Paris, an array of original artworks and photographs donated by the artists, culture tours, Art lectures, wine tasting with Le Cordon Bleu Paris, to name but a few of the items so generously given.. for the benefit of AWG’s worthy causes.

On arrival, champagne and cocktails were being served in the central hall, where dancing was promised to take place later on in the evening.  It was with warmth and anticipation that our fellow Gala Committee Members greeted each other, in amazement that we were actually “living” the day we had been planning for all these months.  The first who called out to me with excitement was Rebecca DeFraites, FAWCO Representative, Board Member, and one-time President of AWG… her in-depth knowledge of, and genuine dedication to charitable causes and particularly FAWCO, is admirable.  Others joined in the excited greetings: our wonderful “band of brothers”: Sara Sautin, Sharon Nossiter, Kathy Araujo, Dara Miller, Cara Sharratt, and last but not least, Gillian Tibbo, the lovely young lady who was ready to lend a hand at every turn.

To our delight, the early part of the evening’s proceedings went exactly as planned, with the large number of guests participating in the “Cork Pull”, and enthusiastically bidding at the Silent Auction – MC’d with great skill by both our “presidents”..  We were then ushered into the majestic dining room, where the large tables were beautifully decorated with the finest china service, heavy with bottles of red and white wine.  An outstanding candle-lit three course dinner followed, which with the gracious company and idyllic surrounds, was a delight to experience.  Speeches followed by the President of the Gala Committee, Terry Verdoscia, with the very deserving winner of this year’s “AWG Woman of the Year Award”, Kathy Araujo, being announced.

Just after the excellent “fondant au chocolat” dessert was being served, AWG’s “auctioneer 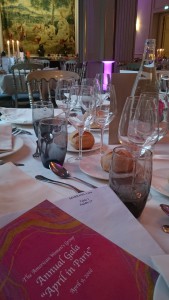 extraordinaire”, Dr. Sandra Gogel commenced the Live Auction and expertly manoeuvred the bidding (and bidding wars..) on the impressive array of donations on hand.  I am pleased to be able to announce that the proceeds from the evening’s auctions are among the highest in AWG Gala history.. all for the benefit of AWG’s very worthwhile charities.

After the serious business of bidding was over, the fun really started.. with dancing on the large pink-lit “piste” going on till late.  What great fun was had by all !

The 2016 AWG Annual Gala reluctantly came to a close.. a truly enchanting evening.  But the great work of The American Women’s Group in Paris and its tireless volunteers continues.  As one AWG member who shall remain anonymous recently stated:

“ Come join our AWG community: the largest, most imaginative and dynamic women’s group in Paris.. we just don’t do boring  ; )  “…