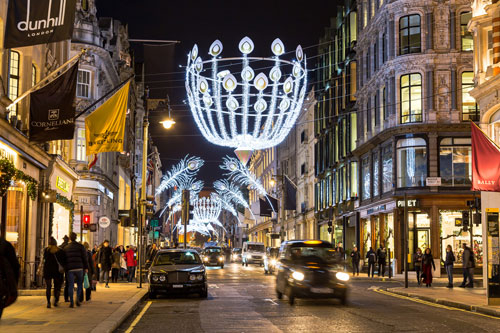 Excitement was in the air, as we embarked on our trip to London over Christmas..

Upon boarding the amazing Eurostar at the Gare du Nord in Paris, two hours and fifteen minutes later we arrived at St. Pancras station in the great city.  We then jumped into the black London cab, which we adore, while the driver chatted and joked with us all the way.. “c’est normal pour les anglais”.

London was ablaze with Christmas decorations which lit up the sky.  Every hotel, restaurant, café, even trees in Sloane Street were shimmering with twinkling lights.  The most extravagant of all was the dripping-with-luxury Bond Street, which was flooded with the Season’s decorations, more Las Vegas than British. Over the top.. rather overwhelming for our liking.

London, as we knew it, has changed dramatically.  The remarkable duality in character of this megalopolis.. this great ciy of impeccable credentials in law, banking, and politics, as well as film, literature, fashion, music, and art, is that it also possessed an understated gentility, a warmth, humour, but also the famous British stiff upper lip.  The cosy village ambience that we were charmed by.. “ça n’existe plus“. 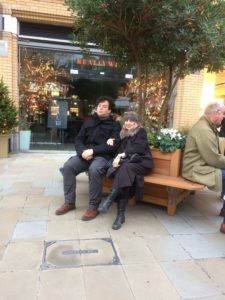 Instead, we were confronted by a deluge, a cacophony of foreign-sounding languages.. more a mini-New York than London. Pleasant, but not English.  Also, we were surprised by the huge chasm existing in the population: between the affluent and the threadbare, the megarich and the depressingly poor.  Why is that..?  In an enlightened culture like Great Britain, it should not be so.

The street was inundated with fabulous Bentleys, stunning “James Bond” Aston Martins.. trendy 4×4 Range Rovers.. women dripping with “signé“.. everything from conspicuous watches to the latest handbags.  On the other hand, we were touched by the down-trodden shoddy state of the profoundly deprived.

Living the socialist, bohemian lifestyle in our Left Bank “quartier” in Paris, we found the overindulgence of luxury and overconsumption among the affluent in London unappealing.

However, having said that, we’re still enormously fond of the great city.. the home of Shakespeare, Churchill, cosy pubs, afternoon tea at Brown’s Hotel, the atmospheric bar at Claridge’s, as well as our favourite, The Wolseley, where the famous British breakfast is memorable.

Visiting London will always make our heart skip a beat.  We will always want to come back to this magnificent city of Britishness.

Travelling back on the Eurostar, we bid farewell to “Londres“, the city we inhabited and loved for many years before we moved to Paris.

We will.. we hope.. often visit this great city, this London, that the Romans named so beautifully.. Londinium.

One thought on “London.. on the Eurostar…”