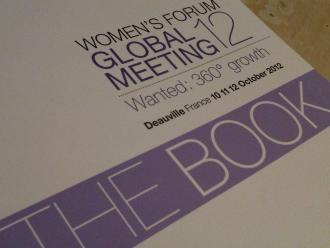 I was looking through the Women’s Forum’s “The Book” recently and a quote from one of the sessions at the 2012 Deauville “Global Meeting” conference, entitled “Can economic austerity be an opportunity for women?” caught my eye :

Given that this quote was uttered by Agnès Audier, Partner and Managing Director of The Boston Consulting Group, and a highly respected professional who’s previously held senior advisory positions in both the private and public sector… she must know what she’s talking about.  The next headline, further down the page, made me gulp even more: “In France, 90% of women entrepreneurs do not draw a salary”.

In President François Hollande’s socialist France, with exploding unemployment levels, historic public debt (reaching 90.2% of GDP in 2012), barely controlled budget deficits, and eye-wateringly high new tax rates on high earners and the rich, I suddenly felt a momentary panic…  What hope do women entrepreneurs have in setting up and launching a business in France, in this austere economic environment, at a time when successful entrepreneurs – who are known to be the engines of “start-up” company financing – are being driven out of the country in droves, in order to escape the stiflingly punitive corporate, income, and wealth tax rates in France (most notably, Hollande’s new “high-earner” tax rate, which will tax up to 75% of income above 1 million euros).

After all, since “start-up” company financing is normally very difficult to access from traditional sources such as banks and venture capitalists (banks usually requiring security, and the majority of venture capital firms not being interested in financing such small amounts), companies often have to turn to “Business Angels” – basically wealthy, entrepreneurial individuals who provide capital in return for a percentage of a company’s equity, taking a high personal risk in the anticipation of owning part of a growing and successful business.

What about seeking government institutional support for “start-up” businesses?  If one is willing and able to devote precious time on filling out pages upon pages of bureaucratic application forms for each government agency initiative (which could otherwise be spent on running one’s business), then that might be a viable option – that is, if your business is within the boundaries of the more traditional business models, such as “boutique”, “boulangerie”, or “restaurant”.  What if, on the other hand, your business is at the front-line of new technology, yet not within the obvious sectors, such as “Hi-Tech manufacturing” or “Telecoms”?  What if your project is an “on-line business” (purportedly the new frontier and future for all industries and enterprises) which does not produce a physical product, but an “on-line service”?  What if one is providing instructive “on-line content” to readers?  I’m afraid that is where the encouragement and nurturing of budding entrepreneurs by government organizations falters…

Early on, I arranged a meeting with a consultant at the “Service creation et développement des jeunes enterprises” at the “Chambre de commerce et d’industrie de Paris”… the lady consultant bluntly informed me that it is very unlikely that French banks will finance “start-ups” whose businesses did not incorporate physical stock or premises.  I was stunned.  Unfortunately, the “new business” government funding agencies proved no more imaginative or lenient in their criteria.  How about a woman entrepreneur launching an on-line magazine in English?  This proved completely beyond their scope or comprehension.

Reading the Le Figaro newspaper this week, I came across an article in the “opinion” section entitled “La marque “France”, de la seduction à la rupture”, written by Cécile Philippe, Director of the “L’Institut économique Molinari”– an independent economic think tank.  In the article, she states:

Meaning that during this long-term period of economic crisis, the “pouvoirs publics”, or the authorities thought that it is sufficient to sing the praises of the “Made in France” label and the merits of French competence and expertise in order to calm the spirits, in the face of the very negative current situation: the endemic closing of factories, mass redundancies, and the steady spiraling of unemployment rates in France, which is accentuating the fear of a massive wave of de-industrialization.  The only way to redress the seriously disintegrating economic climate in France, Cécile Philippe argues, is for the government to put in place inherently business-friendly practices, such as tax policies, in order to retain the best entrepreneurial and business talent, if France is to have any realistic hope of competing in an increasingly globalised market.  I could not agree more.

Which takes me back to my initial question of: “What hope do women entrepreneurs have in setting up and launching a business in France, in this austere economic environment?”  At a time when it is being openly admitted and debated that France’s best entrepreneurial, business, and investor brains are abandoning the sinking French economic ship, for multifarious reasons, then the answer could not be very hopeful.

However, since I, and the rest of the Lettre de Paris team, are fervent Francophiles, true believers in France and its fundamental values, and in the indomitable human spirit – more particularly female fighting spirit – I will allow myself to be persuaded by the Women’s Forum session title-question and answer, “Yes, economic austerity CAN be an opportunity for women”, confirming their argument that despite the current challenges: “women excel at adapting to crisis, relying on their entrepreneurial skills to survive and even thrive.”

I drink to that !