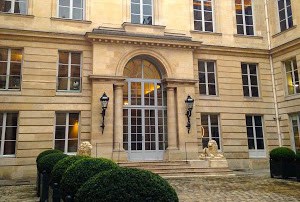 If only walls could talk… then this elegant 18th century private home (hôtel particulier) in the centre of Paris would fill our ears for hours.  Known today as the Hôtel de Talleyrand, it was originally designed and built between 1767 and 1769 for Louis Phélypeaux, Comte de Saint-Florentin, one of the most influential figures of the reign of Louis XV.  From its earliest days, this neo-classical building was a focus of political power and diplomacy.  When the American Women’s Group of Paris offered a private tour to its members, I quickly signed up. 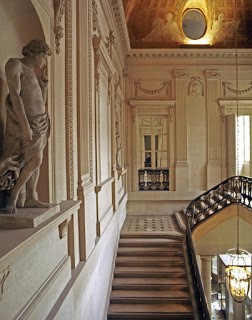 The architect Jean-Francois Chalgrin designed the interiors with a team of leading sculptors, painters and master iron-smiths.  The grand staircase reflects their artistry in the sweep of the balustrade with ironwork by Pierre Deumier – the marble statue in its niche, reflected nicely in the mirror – and the glorious ceiling painting by Jean-Simon Berthélemy, titled “La Force accompagnée par la Prudence portant à l’immortalité le globe de la France“.  What a testament to the Age of Enlightenment!

After the death of the Compte de Saint-Florentin, the house passed through various hands, including being the Embassy for the Venetian Republic for a while, before it came into the possession, in 1812, of this gentleman, for whom the house is still named: Charles Maurice de Talleyrand-Périgord.  From 1812 to Talleyrand’s death in 1838, the house was consi 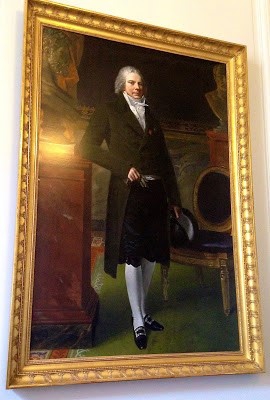 dered ground zero for the highest levels of French society and for all the intrigues of political life.  Talleyrand himself was already widely admired (and feared) for his diplomatic skills as he played them out through the regimes of Louis XVI, the French Revolution, Napoleon, Louis XVIII and Louis-Philippe!  Some people believed he was brilliant (if crafty), others swore he was a cynical traitor.

Victor Hugo wrote this about Talleyrand and his house in his Choses Vues 1830 – 1848:

“Into this palace, as a spider into its web, he enticed and captured, one by one, heroes, thinkers, conquerors, princes, emperors, Bonaparte, Sieyès, Mme de Stael, Chateaubriand, Benjamin Constant, Alexandre de Russie, Guillaume de Prusse, Francois d’Autriche, Louis XVIII, Louis Philippe, and all the gilded glittering flies which buzz through the history of these past forty years. All this glittering swarm, fascinated by the penetrating eye of this man, passed in turn under this gloomy entrance bearing on it the inscription: Hôtel Talleyrand.” 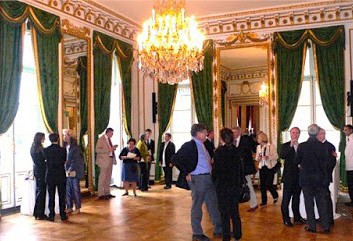 Certainly as we passed through the beautifully-restored rooms (now used as reception rooms for conferences and cultural events), the scope of his power became evident.  In 1814 in this Salle d’Audience, Talleyrand brought together the leaders Czar Alexander I of Russia, King Frederick William III of 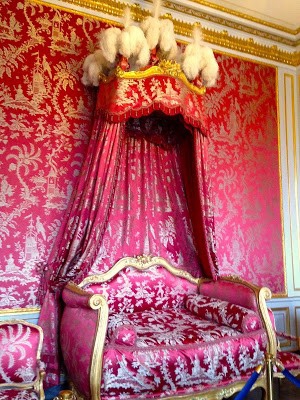 Prussia, Emperor Francis I of Austria and the Duke of Wellington (the British Ambassador) to negotiate peace in Europe and the restoration of the monarchy in France and to prepare for the Congress of Vienna.

The Czar slept in a lavish bedchamber.. “le lit à la turque” (the Turkish bed).  Sculpted and gilded beech wood forms the bed frame, adorned with sumptuous silk hangings, all a reflection of the interest in exotic orientalism in the late 18th century.  It appears to have been the custom to sleep in a reclining, half-seated position, which would account for the short length of the bed!

In the “Grand Cabinet“, Talleyrand would receive those for whom he had a special regard, who warranted a particular, more private audience. I imagine they would have greatly admired the panels of carved, gilded wood, as well as exquisitely sculpted female figures, bearing trays of fruit.

For me, the most beautiful treasure was the clock, known as the “Astronomy Clock”, with Urania herself 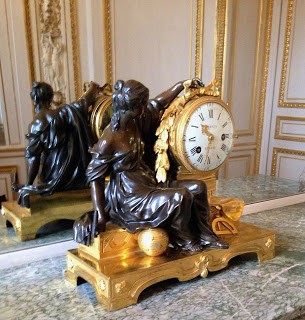 seated beside a stack of books, a globe under her leg, a sextant lying by the books.  And it still keeps perfect time!

A tiny room next to the grand bedchamber signals the arrival of the Rothschild family, who purchased the house after Talleyrand’s death in 1838, and remained owners until 1950, more than 100 years!  They took on some new construction, renovation and decoration under the supervision of Léon Ohnet.  This room, with its ornamental wood-painted panels, as well as its intricate marquetry parquet flooring, became either a dressing room or bathroom to young Guy de Rothschild in the early 20th century.

There is one panel in the back corner of the room that is not all that it seems.  A secret door led to a staircase up to the young man’s bedchamber on the floor above.  Today it is closed off with just a small plaque telling the tale!

Another beautiful clock adorns the fireplace in yet another spacious reception room that served as the Rothschild’s dining room.  More meticulously sculpted figurines catch the eye, in this case depicting the four seasons.  One, depicted a poor young woman, half naked and shivering, which we decided represented “Winter”.

A window in the corner of the room looks onto the rue de Rivoli.  From here, the Rothschild family would have been able to watch the Nazis marching into Paris in 1940.  They subsequently occupied the Hôtel de Talleyrand during WWII.  A sobering image on this grey February morning.

The final room we visited, La Grand Salle, brings the history of the Hôtel de Talleyrand through the years following WWII.  In 1947, the US Government leased the house from the Rothschilds, purchasing it from them in 1950.  And it is here that General George C.

Marshall, as Secretary of State, sat down with Ambassador W. Averell Harriman to bring together 17 European countries, to create the American Administration of the European Recovery Program, better known as the Marshall Plan.

Under his leadership, General Marshall persuaded former enemies to set aside rancour, rivalries and revenge.  With the help of the United States, they began the challenging task of rebuilding their economies, working to bind their communities together into a group of nations that some years later became known as the European Union.

Black and white photographs on display show the group of (mostly) men seated in this Grand Salle, surrounded by screens covered with photographs, data, proposals. 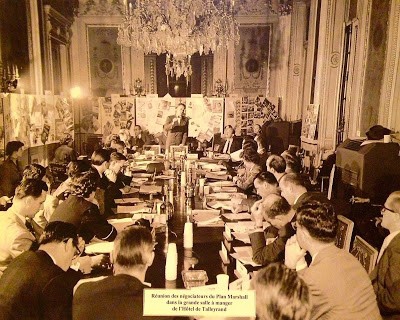 It was an astonishing undertaking at a time of enormous loss, upheaval and tragedy.  The Plan, however, only looked to the future, intent on modernizing European industrial and business practices.  In April, 1948, President Truman signed the Plan, granting $5 billion to begin the process of recovery.  By 1952, when the funding ceased, $13 billion had been donated by the United States in economic and technical assistance.  At this time, the economy of each European country exceeded its pre-War levels, and the Marshall Plan was deemed a “great success”.

A plaque on the outside of the building commemorates the 50th anniversary of the Marshall Plan.  And a second plaque reminds us of the other great figure who lived here: “En cet hôtel vecul de 1812 à 1838 Charles Maurice de Talleyrand-Périgord, ministre et diplomate… “.

Perhaps Talleyrand‘s long tenure in the house, his ever canny negotiating for peace and for the glory of France, no matter the political cost, has left a legacy that a diplomatic solution is always to be preferred over war, and has allowed so many good things to be achieved within its walls over the century and a half since his death… (maybe the Syrian cease fire talks should relocate here).

One thought on “If Only Walls Could Talk… Hôtel de Talleyrand”