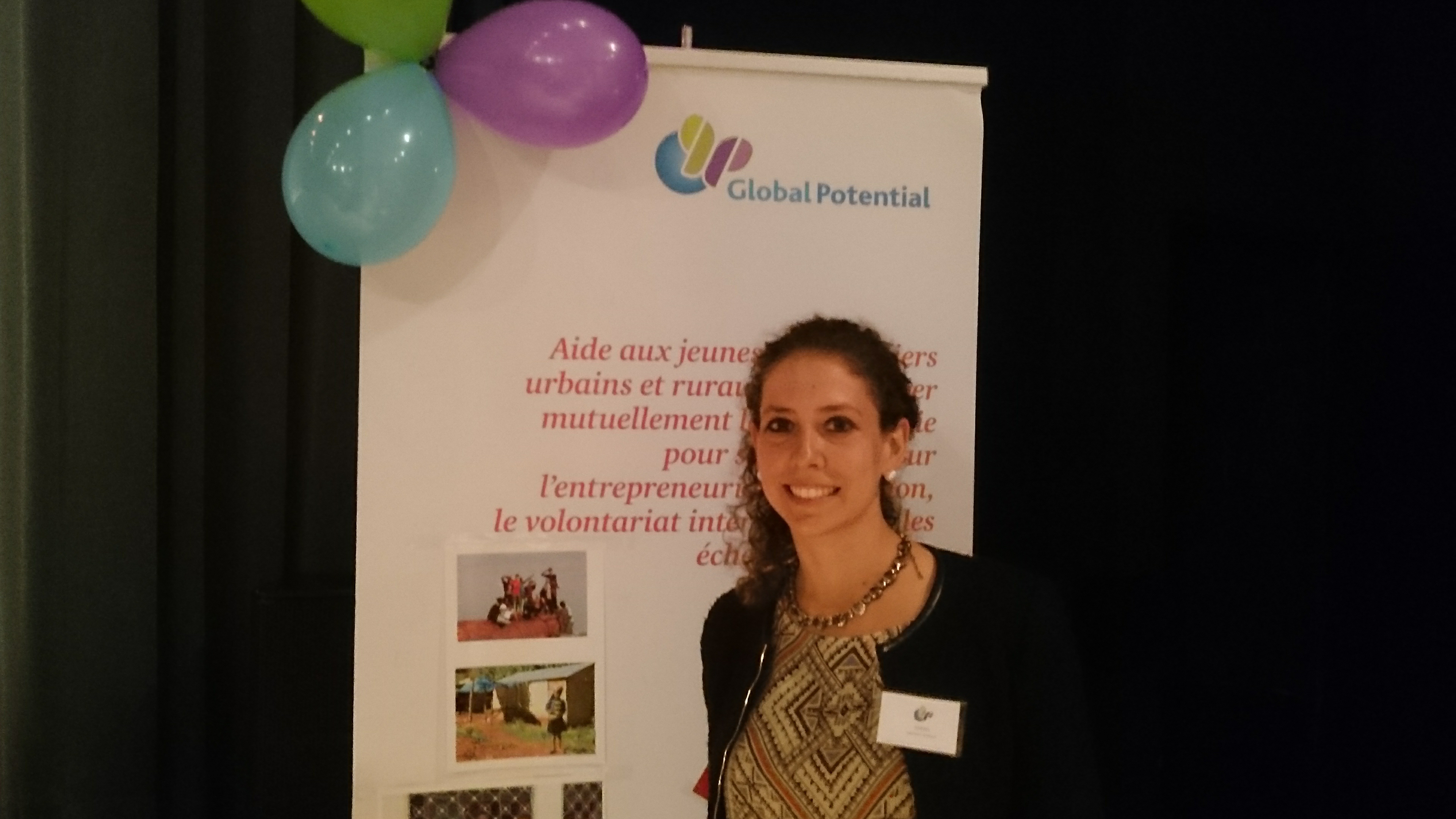 I recently read an interesting article whose author was making an argument for why he thinks the world is undergoing a “paradigm shift”.. i.e. the early stages of a fundamental change in approach or underlying assumptions, one of several monumental shifts in history that have uprooted our society’s very foundation, such as the Industrial Revolution, taking it off its current path and putting it on a new one.

One of the signs the writer cites to support his argument of a paradigm shift is his belief that a global consciousness shift is underway in which..

“People are starting to see themselves as more than just individual people operating in an isolated bubble, but instead as a connected piece in the collective consciousness of planet Earth. The Internet, along with the increased capacity for travel, has allowed people from all over the world to connect. So many parts of the global society have become interconnected and people are beginning to take notice of not only their own country, but countries abroad. Many are beginning to realize that one group of people suffering means everyone is suffering. This interconnection to everything has given rise to practices such as meditation, yoga, and travel.” *

I myself was witness to a real-life example of this new outlook recently when I was invited to attend the “Remise des diplômes du 4ème promotion”.. or the graduation ceremony of the 4th class of YES Akademia’s signature “IMPOWER” program at the Carreau du Temple cultural centre in the Marais.

Having been part of the American Women Group in Paris’ (AWG) Annual Gala Organising Committee this year, where we helped raise funds for four worthy charities – one of which was YES Akademia (YAKA) – I was curious to find out more about this charitable organisation and its activities.. as well as its founder Sarah Gogel.

As I entered the newly inaugurated dark-grey iron façade of the Carreau du Temple’s reception hall, I was quickly welcomed by a group of young, excited, multi-cultural volunteers ushering me to the well-organised registration desk, manned by several efficient students.  Upon registering, I was handed a thick leaflet entitled “Retours d’expériences”, filled with the laureates’ personal stories and a coloured leaflet presenting the graduates and the programme for the day’s ceremony. 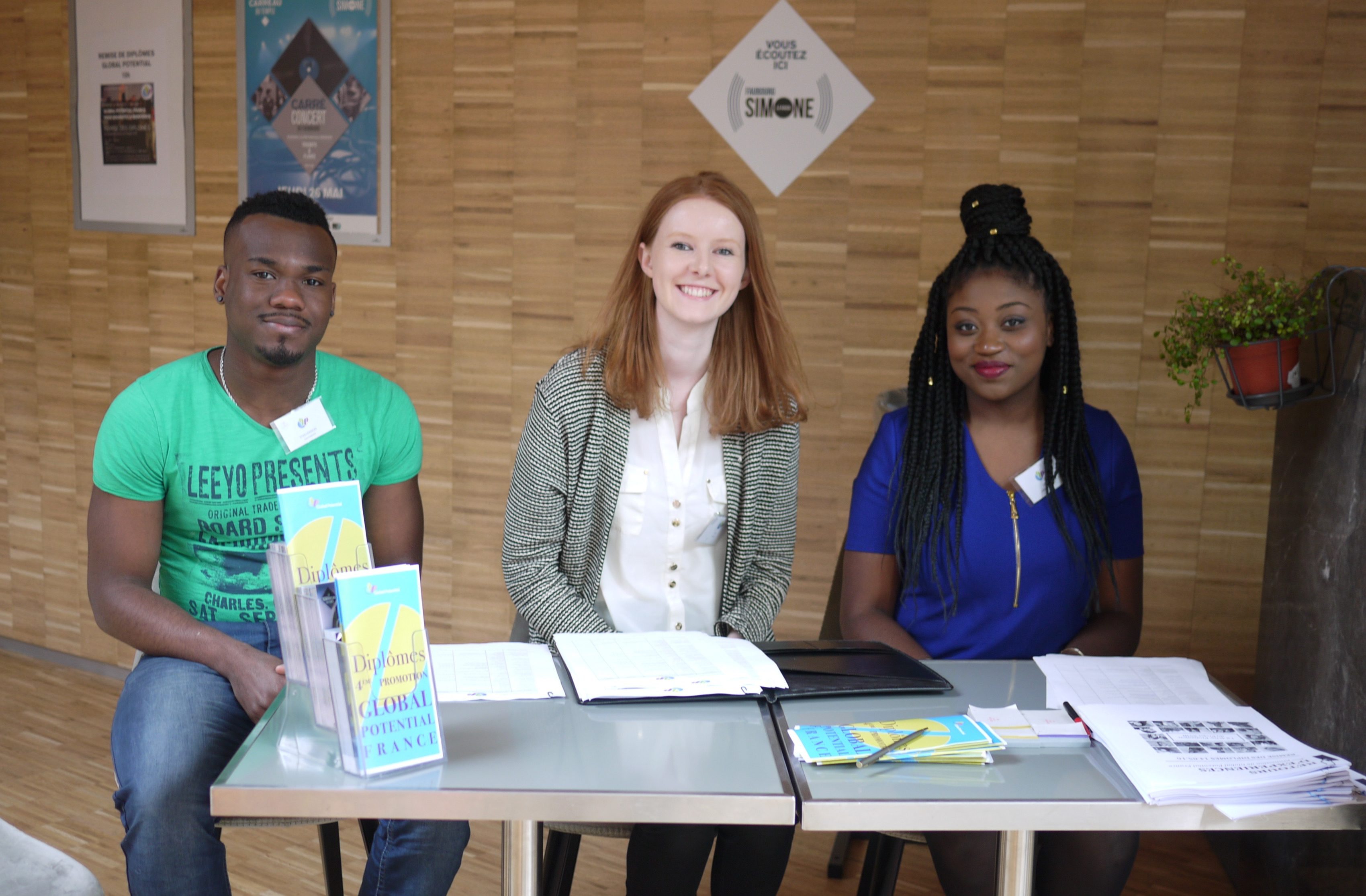 Not knowing a great deal about YES Akademia before arriving – except that we at AWG were sponsoring its 18-month educational program, which trains French youth from mainly low socio-economic backgrounds to become global leaders in their own communities – I was keen to find out more.  I spotted an AWG fellow member speaking to a lovely young lady sitting on a stool next to the information desk.  I went over and said hello and was pleasantly surprised when she introduced the young lady as Sarah Gogel, the Franco-American founder of YES Akademia, a grassroots NGO, community-based “for-social-profit” association (as opposed to the less positive term “not-for-profit”), which Sarah herself first co-founded in New York more than ten years ago under the name of Global Potential, opening up their Boston office two years later, and by 2012 setting up and running the French NGO on her own. YES Akademia recently rebranded itself from Global Potential France ; Y.E.S. stands for « Youth Empowerment and Solidarity » and Akademia refers to Plato’s multi-disciplinary learning forum circa 400 years B.C.

I was to discover that YES Akademia’s mission is to empower youth and communities around the world through education, social-entrepreneurship, international service learning, and cultural exchange.  It provides high-potential urban and rural youth from low-income communities with the leadership and social entrepreneurial skills and perspectives that enables them to affect positive change in their lives, communities, and global community. 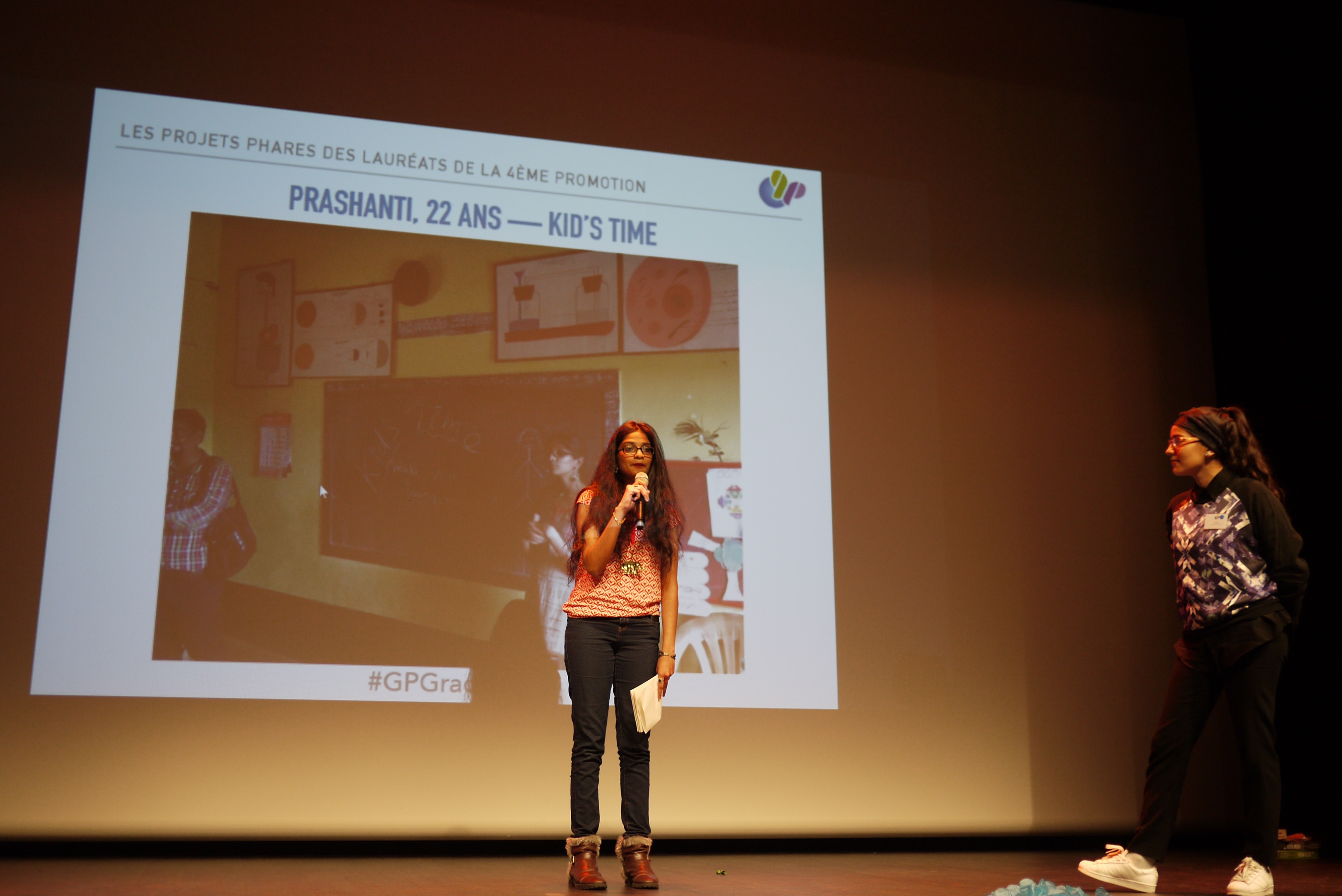 YES Akademia trains around 500 such youth each between the ages of 15 and 30, not just from Paris’ “banlieues” but also from other neighbourhoods in Paris and the rural zones of Haïti, Senegal, Nicaragua, Dominican Republic, and India.

So who is this young woman behind the birthing of such a worthwhile, topical, ambitious project, who in real life doesn’t look much older than her infectiously enthusiastic young protégées?

An extensive list of internships, volunteer work, and awards add to Sarah Gogel’s impressive C.V., from being an International Humanitarian Volunteer at Mother Teresa’s Charity in Varanasi, India (thus her speaking Hindi and Urdu), a Volunteer Disaster Mental Worker at the American Red Cross of Greater New York, and a Volunteer United Nations Representative, to Legal Internships at the Fédération Internationale des droits de l’Homme and the United Nations High Commission for Refugees, based at their Washington D.C. Caribbean Unit office and later their field office in Calais, France carrying out legal advocacy and strategies for protection of refugees from Sudan, Eritrea, Ethiopia, Afghanistan, Chad, Somalia, Morocco and Nigeria.

Back to the graduation ceremony of YES Akademia’s Fourth Promotion à Paris… as guests were ushered in to the large modern auditorium where the laureates, their families, and friends were already filling it up, this event marked the end of these 21 young graduates’ signature “18 month Youth Leadership program”, encompassing three key phases:

. Preparation and raising of consciousness: 6 months of weekly 3-hour workshops getting together youth, volunteers and staff in Paris to learn the tools for better public speaking, creating social entrepreneurship projects, understanding and acting upon social injustices locally and globally, and learning how to create multicultural and culturally-sensitive development projects.

. Action: 10½ months of methodical mentoring to support youth in developing their skills and passions. This phase is meant to integrate their experiences during phases 1 and 2 through their own social / cultural / environmentally-friendly social entrepreneurship project.

Proceedings at the graduation party – which included a presentation of YES Akademia by Sarah and her President Corinne Thouvenin, followed by a presentation of the personal projects of the 4th Promotion, then performances by various talented young artists, film projections, and the actual “remise des diplômes” – was admirably organised by the next promotion of young laureates of IMPOWER, namely the 5th Promotion.

I was particularly touched by the screening of a film made by two of this years’ graduates Maïmouna Haïdara and Lola Lanier called “Regards Croisés” (aided by David Desgardin the cameraman), documenting scenes of women’s daily lives during their trip to Senegal last summer, and interviewing members of the community in Nianiar, the film comparing similarities and differences in the situation of women in Senegal and Haïti.  Both of the highly talented and engaged graduates spoke about their experiences while making the film, stating that their idea was to get these local women’s point of view and not impose their own occidental point of view.  Admirable…

Many of the laureates spoke of how YES Akademia’s IMPOWER program has not only changed their outlook but changed their lives to the better, empowering them to “dream bigger and do greater”, in their own lives but also for their communities.  For example, it was shown that parents whose children have been laureates become very open themselves to various cultures, to the point of encouraging their younger children to join the next promotion of the project. 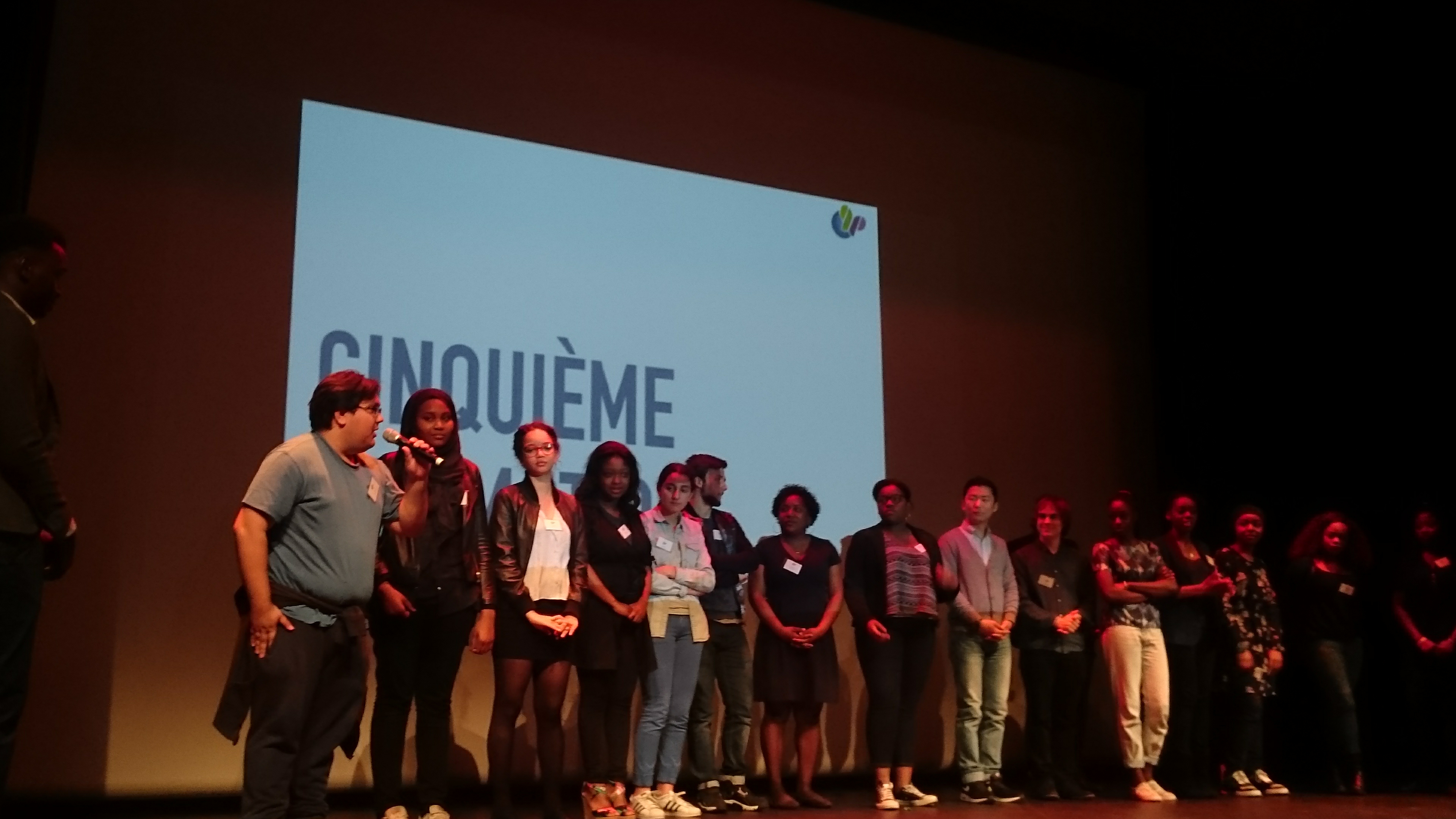 As I left the Carreau du Temple with the optimistic, hope-filled, energised images of these youth still fresh in my mind, I wondered whether Sarah Gogel could have envisaged nearly eight years ago, when she first started this grassroots “for-social-profit” association in New York, how her efforts would have such a tangible effect on so many diverse young people’s lives… by engaging them, their families, and their communities to learn about and work to address human rights locally and internationally.   For with the mixture of activism, travel, social entrepreneurship, art, and international cultural exchange, YES Akademia’s programs ingeniously helps them combat physical and mental segregation and empowers them – those who represent our future generations – to become powerful changemakers and entrepreneurs of their own lives.

This brought me back to the article I had read and the author’s argument for the existence of a global paradigm shift.. “people are beginning to emotionally connect to life all over the world and not just their immediate home and surroundings”.. adding:

“The world is very much in the early stages of a shift in consciousness and design. These shifts are leading to a growing decentralization movement in which the power controls of society are taken from the few and given to the many”, although “there is a very strong force at play that is fighting against this”.. however, “the global paradigm shift has one advantage that I believe will be the game changer, and that’s the will of the people. This is not just the people of a single country, but internationally, as united global movements.. are happening simultaneously all over the world around central causes. So go-ahead and participate, for we are in the early stages of a revolutionary paradigm shift in the consciousness of the masses that can truly change society for the better.”

With that in mind, I thought about Sarah Gogel.. how fulfilling, despite the many challenges, to be an agent for change, transforming young people’s lives, outlooks, perceptions, futures and by default, those of the society they inhabit.. an active participant in a global revolution.

How thrilling to be… a changemaker.